Rosacea (rose-AY-sha) is a common skin disease. It often begins with a tendency to blush or flush more easily than other people.

The redness can slowly spread beyond the nose and cheeks to the forehead and chin. Even the ears, chest, and back can be red all the time.

Rosacea can cause more than redness. There are so many signs and symptoms that rosacea has four subtypes:

With time, people who have rosacea often see permanent redness in the center of their face.

If you are living with rosacea, you are in good company. Some famous people have struggled with rosacea:

Rosacea causes more than a red face. There are many signs (what you can see) and symptoms (what a person feels) of rosacea.

Because rosacea has so many signs and symptoms, scientists created 4 subtypes of rosacea. Some people have more than one rosacea subtype at the same time. Each subtype requires different treatment.

Acne rosacea: This subtype of rosacea is most common in middle-aged women. 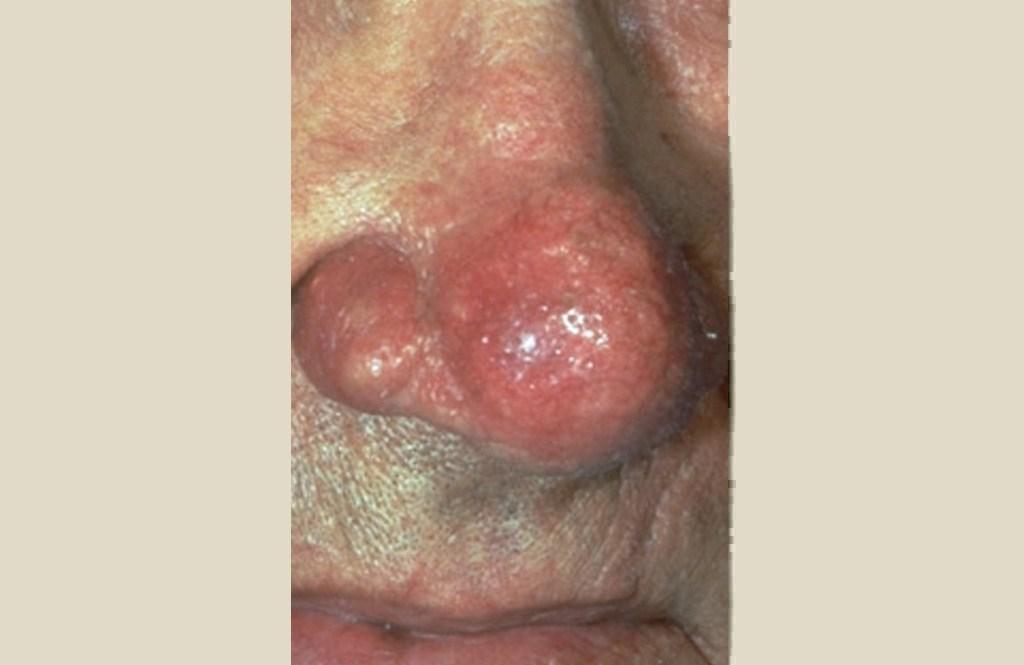 Rhinophyma: Although rare, rosacea can cause the skin to thicken and have a bumpy texture. When this happens, it is called rhinophyma.

This subtype is rare. When it does occur, the person often has signs and symptoms of another subtype of rosacea first. The signs of this subtype are:

Subtype 4: In the eyes

Some people get rosacea in their eyes. The eyes may have one or more of the following:

Rosacea can affect quality of life

Rosacea can affect more than the skin and eyes. Because rosacea is a chronic (long-lasting) skin disease, it can reduce a person’s quality of life. Many people report problems at work, in their marriage, and with meeting new people. Surveys and studies report that living with rosacea can cause:

Treatment seems to improve a person’s quality of life. Studies show that when people have fewer signs and symptoms of rosacea, their quality of life improves.

Rosacea: Who gets and causes

Rosacea is common. According to the U.S. government, more than 14 million people are living with rosacea. Most people who get rosacea are:

Scientists are still trying to find out what causes rosacea. By studying rosacea, scientists have found some important clues:

How do dermatologists diagnose rosacea?

How do dermatologists treat rosacea?

Treatment for the skin includes:

Dermatologists can remove the thickening skin that appears on the nose and other parts of the face with:

When rosacea affects the eyes, a dermatologist may give you instructions for washing the eyelids several times a day and a prescription for eye medicine.

There is no cure for rosacea. People often have rosacea for years.

Some people have rosacea flare-ups for life. Treatment can prevent the rosacea from getting worse. Treatment also can reduce the acne-like breakouts, redness, and the number of flare-ups.

To get the best results, people with rosacea also should learn what triggers their rosacea, try to avoid these triggers, and follow a rosacea skin-care plan.

Learn how keeping a journal and other lifestyle tips can help reduce rosacea flares.

If you believe that you might have rosacea or have been diagnosed with rosacea, the following tips can help:

Learning to control rosacea and getting support helps many people live more comfortably.

Office Hours
Get in touch