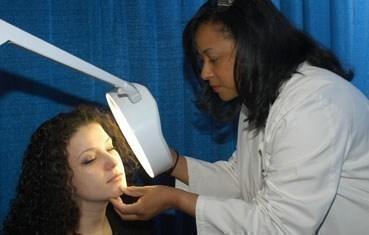 If a mole starts to grow, itch, or bleed, make an appointment to see a dermatologist.

Moles are common. Almost every adult has a few moles. Adults who have light skin often have more moles. They may have 10 to 40 moles on their skin. This is normal.

You should not be overly worried about your moles. But you should know:

Moles in children: What parents should know

Moles on a young child’s skin are generally nothing to worry about. It is normal for new moles to appear during childhood and adolescence. Moles will grow as the child grows. Some moles will darken, and others will lighten. These changes are expected in children and seldom a sign of melanoma — a type of skin cancer that can begin in a mole.

Image property of the American Academy of Dermatology.

People often want to know how they can tell a mole from a melanoma. Here is a general rule.

A mole on your body has these traits: 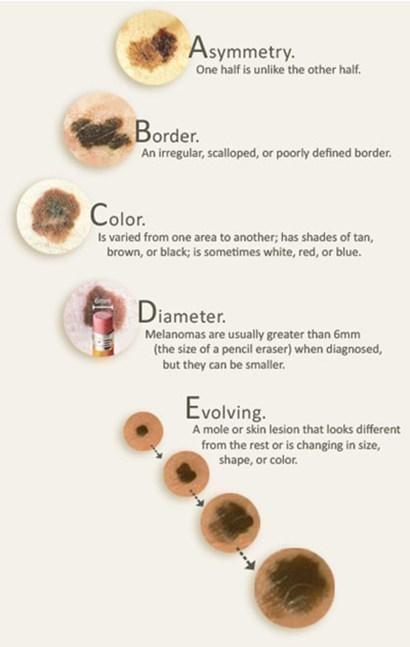 Your moles may not look alike. Even in the same person, moles can differ in size, shape, or color. Moles can have hair. Some moles will change slowly over time, possibly even disappearing.

Moles can appear anywhere on the skin. Moles develop on the scalp, between the fingers and toes, on the soles and palms, and even under the nails.

If you see a mole or new spot on your skin that has any of the ABCDEs of melanoma, see a dermatologist immediately.

Image property of the American Academy of Dermatology.

​Moles: Who gets and types

Almost every adult has a few moles. Most adults have a type of mole called a common mole.

There are other types of moles. Some types increase a person’s risk for getting melanoma, a type of skin cancer. These moles are described below. 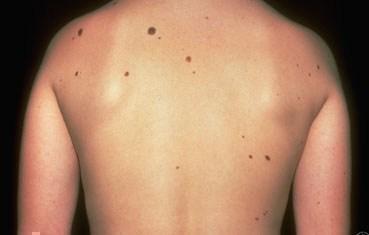 This type of mole can look like melanoma. It is not melanoma. But you have a higher risk of getting melanoma if you have:

Your dermatologist may call an atypical mole a dysplastic (dis-plas-tic) nevus. Atypical moles are often:

Some people who have many atypical moles have a medical condition called familial atypical multiple mole-melanoma (FAMMM) syndrome. People with FAMMM syndrome have:

Your dermatologist may call your mole a nevus. 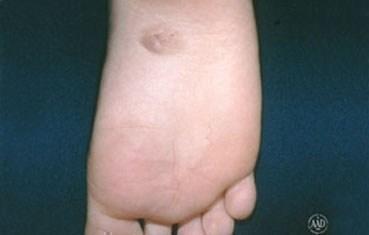 Congential mole: This congenital mole was small when the girl was born. When it started to grow, her dermatologist removed it.

This mole often looks like melanoma. It can so closely resemble melanoma that a dermatologist cannot tell by looking at it. That’s because this mole is often is pink, raised, and dome-shaped. It also can have different colors in it such as red, black, and brown. The mole may bleed. It can have an opening that oozes. 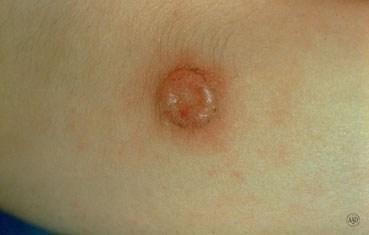 Spitz nevus: This type of mole is often pink, raised, and dome-shaped.

Most Spitz nevi appear on the skin during the first 20 years of life. Spitz nevi also develop in adults.

When a mole appears on the skin after a person is born, it is called an acquired mole. Most people who have light skin have about 10 to 40 of these moles. These moles also are called common moles.

If a person has 50 or more of these moles, the person has a higher risk for getting melanoma.

How do dermatologists tell whether a spot is a mole?

A dermatologist’s trained eye can often tell whether a spot is a mole.

How do dermatologists treat moles?

Most moles do not require treatment. A dermatologist will remove a mole that:

Never try to shave off a mole at home.

Here’s why you should never try to shave off a mole at home:

After a mole is removed, the skin will heal. If the mole grows back, immediately make another appointment to see your dermatologist. This is a sign of melanoma, a type of skin cancer.

Dermatologists recommend the following to their patients:

An easy way to reduce your risk of getting skin cancer is to skip getting a tan. You also should wear sunscreen every day.

People who have noticeable or unusual moles often have to deal with stares and whispers. Meeting with people who face similar challenges can provide emotional support.

© 2020 American Academy of Dermatology. All rights reserved. Reproduction or republication strictly prohibited without prior written permission. Use of these materials is subject to the legal notice and terms of use located at https://www.aad.org/about/legal

Office Hours
Get in touch